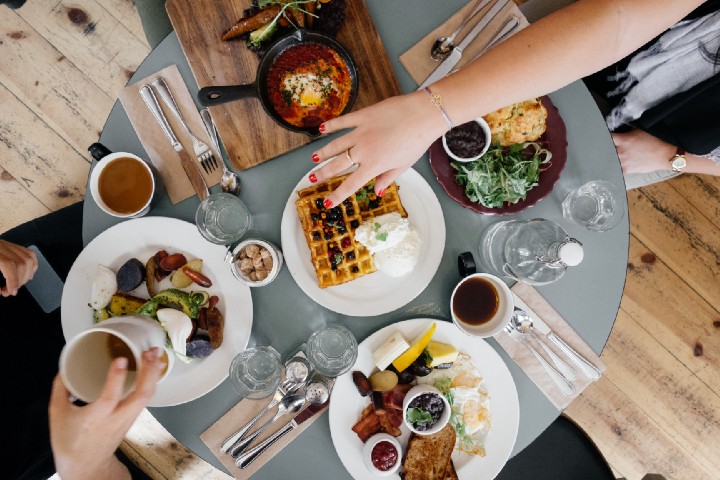 One of my biggest pet peeves is the use of words such as “guilt” as a way to describe a feeling toward food and eating.

Guilt is a negative word. Guilt is controllable.

Food companies use that word to sell their “healthy” alternatives. Fitness companies use it to coax people to hand their money over for “weight loss solutions”. Individuals use it as a judgment about what they eat — as if adult humans are not responsible for feeding themselves and don’t have a choice about what they consume.

It happens year-round, of course, but is most intense during “the holiday season”.

Four days ago I tweeted this:

Six days before Canadian Thanksgiving and I’ve seen the word “guilt” in a relevant newsletter headline. This kicks off my seasonal rage towards manipulating people by telling them that they should feel “guilty” about what they put in their face.

This isn’t new information: Marketing is manipulation that begins months before the new year.
(No, you’re not fat.)

I believe that good ol’ marketing is behind people thinking that they’ve gained weight over the holidays. Headlines in magazines and blogs such as “How to avoid gaining weight over the holidays”, “10 Ways to Avoid Holiday Weight Gain”, “How to Beat the Holiday Weight Gain Odds” and “Weight-Loss Solutions for the New Year” prevail. Marketers imply that you’re fat — preying on common insecurities — so that they can sell weight loss solutions. And maybe you are overweight and perhaps experiencing health issues as a result, but if you are, most of those solutions aren’t for you anyway. Those so-called solutions address the weight rather than overall health. I’m not a weight-loss professional, but I’m willing to bet that you didn’t go from skinny to obese in a matter of weeks.

There’s some cross-border pollination here in a bad way.

Simply put, if you live in the U.S. “the holidays” are six weeks.

For Americans, “the holidays” begin at Thanksgiving in November. An article on the Forbes website published on November 25, 2013, called 7 Ways To Curb Weight Gain Over The Holidays, refers to a statistic that the average weight gain over the holidays — the American holidays — is 7–10 pounds.

The Forbes article links to a study report called, “Holiday weight gain: fact or fiction?” that defined as the 6-week winter period from Thanksgiving through New Year that that concluded that for most people, holiday weight gain is a myth.

That study said that “weight gain was greater among individuals who were overweight or obese” and that the average amount of weight gained was only 5 lbs.

The Forbes writer, possibly spinning the data to align with her headline, states:

According to the Calorie Control Council, the true average weight gain is 1 to 3 pounds, which doesn’t sound like that much until you realize that we’re talking about a four-week period, which means many people are packing on almost a pound a week.

No, 1–3 pounds is not a lot, and it’s a six-week period, so it’s not “ almost a pound a week.” The writer is feeding into the holiday weight gain narrative.

Here in Canada, people see U.S. advertising, and it gets to them too. But Canadian advertisers also want their audience to believe in holiday weight gain.

I don’t believe that people gain the weight they claim to over the holidays — whether six weeks or 1. I’m not calling people liars, but I strongly suspect that people falsely perceive that weight gain because of the classic Christmas tale:

It’s presented as a cautionary tale with advice about how to avoid it. And geez, if everyone’s talking about it, it must be a thing.

I don’t believe that it’s possible to gain a significant amount of weight in a matter of days. You might acquire a few pounds or a pants size, but your body isn’t transforming radically. Holiday weight gain is not an epidemic.

I believe that some people stress eat in the weeks leading up to Christmas, which can contribute to real weight gain. Holiday parties increase calorie intake, no doubt. Real weight gain. There’s less time for exercise and people are generally less active when the weather gets colder anyway. Given the 6-week holiday season in the U.S., I believe that over those weeks, yes, it’s possible to gain weight. But, a significant amount?

Here’s another thought: When you’re bloated, it might feel like you’ve gained weight, and it might look like it. It’s the holiday-centric version of what some people call the “food baby”. You’re eating lots of salt. You might be eating foods that you only eat one time of year, and that confuses your body. You’re eating combining foods that you don’t usually eat together, and snarfing it quickly. However, bloat doesn’t always come with extra weight. They’re two different things. So, if you think that you’ve gained weight around your mid-section, consider that it might not be weight at all. Those pants that felt tight last night might fit fine today.

People carry extra water from what they eat and drink, from stress, from travel, and more.

Fabricating the problem to sell the solution

All that said, please, marketers, STOP TELLING PEOPLE THAT THE HOLIDAYS ARE MAKING THEM FAT SO THAT YOU CAN SELL THEM “SOLUTIONS”!

Creating problems to make solutions is what marketing is about. Some ailments are “discovered” to sell drugs, gadgets are invented to fill needs you didn’t know you had, and you’re told that you’ve gained weight so that you can be sold on weight loss. Your pants might feel a little snugger when you’ve been brainwashed like that. Or maybe you’re bloated.

I understand having something to sell and wanting to capitalize on the best time of year, but the whole January thing is out of hand. Health and wellness should be a year-round endeavour. Don’t try to sell me your bullshit e-book. “10 top weight loss tips to survive your new year’s resolution”? Give me a break.

— Everything in this post from “Advertisers are brainwashers” through the last section was copied from a piece that I published on my wellness blog on January 1, 2016, with only some minor edits but here’s where my rant continues:

As I said, I received an email with “guilt” in the headline four days ago.

Then, in my Instagram feed today, I saw an image with a customer testimonial for a company that makes freeze-dried okra. I don’t want to name the company or product here (the product is one of my new favourite finds), but I do want to share the contents of the post. The testimonial went like this:

I’m always a fan of snacks I don’t have to feel guilty about. Bonus points for [product name] for having a satisfying crunch.

I say all the time that it’s your decision whether or not to put something in your mouth.

As my usual rant goes, “If you think that something that you’re about to eat or drink will make you feel guilty, either don’t put it in your face or do it, enjoy it and shut the fuck up.”

This stock photo that I found while typing up this post says it nicely:

People — especially women — food shame themselves because they internalize messages that say we should. People feel guilty because they’re told they should.

Please, people, I beg you. I implore you:

STOP FOOD SHAMING YOURSELF AND OTHERS.

STOP INTERNALIZING THOSE CORPORATE MESSAGES ABOUT FOOD AND SHAME AND GUILT.

You don’t have to feel guilty about anything you eat or drink. You are not a bad person for eating something “unhealthy”. You are not less-than. You are allowed to enjoy what you enjoy — but, you know, make sure that your food and drink intake is nutritionally balanced overall. Allow yourself comfort foods. Don’t let food be the enemy. Food should not make you miserable. It should nourish your body and/or your soul.

Another word about marketing: Good copywriting practice is to use words that the target audience uses, instead of using jargon. Speak the audience’s language. So, if the audience says they feel guilty, a company will use a word such as “guilt-free”. By associating the word “guilt” with food, you’re giving the companies their product messaging. They’re echoing it back to you.

There’s nothing wrong with you

You’re not bad or broken. A processed food system has manipulated you, but you chose to act on that manipulation. You are wired to like sugar, salt and fat, neither of which are inherently “evil”.

Howard Moskowitz, an American market researcher and psychophysicist who has worked for companies such as Dr Pepper, Cadbury Schweppes, Campbell Soup, General Foods, Kraft and PepsiCo, established the term “bliss point”. The bliss point is the optimal amount of salt, sugar, and fat (or richness) in a food product. (Here’s one information source.)

Our bodies evolved to crave sugar and dislike bitter. We have taste buds for sweet and salty. Consuming sugar stimulates the neurotransmitter serotonin, which makes us feel good.

You are not broken.

You also have free will.

“If you think that something that you’re about to eat or drink will make you feel guilty, either don’t put it in your face or do it, enjoy it and shut the fuck up.”

Eat what makes you happy.

The holiday season is about comfort and joy, not self-loathing and misery.

Also, wear your stretchy pants (or skirt) to a festival meal. Not doing so is a rookie mistake.

In response to my tweet about seeing the word “guilt” days before Thanksgiving, a good friend of mine responded, “I just feel guilty if there’s leftover pumpkin pie that goes to waste…” 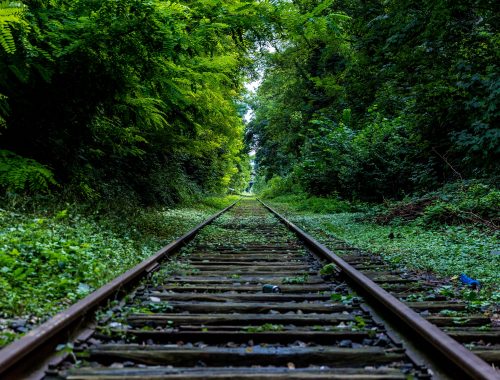 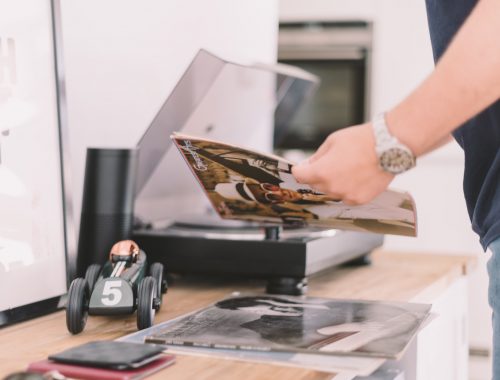 Crossing Musical Genres As An Artist 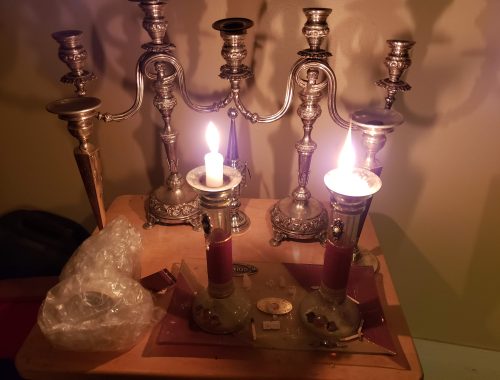